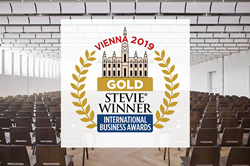 Mr. Provenzano’s achievements in the nutrition industry speak for his abilities as a leader who not only transforms organizations from their initiation but someone who takes care of employees, providing them a better path in both their professional and personal lives.

Makers Nutrition was named the winner of 10 Stevie® Awards in the 16th Annual International Business Awards®.

The International Business Awards are the world’s premier business awards program. All individuals and organizations worldwide – public and private, for-profit and non-profit, large and small – are eligible to submit nominations. The 2019 IBAs received entries from organizations in 74 nations and territories.

Nicknamed the Stevies for the Greek word for “crowned,” the awards will be presented to winners at a gala awards banquet at the ANDAZ Hotel am Belvedere, Vienna, Austria on 19 October.

A record total of more than 4,000 nominations from organizations of all sizes and in virtually every industry were submitted this year for consideration in a wide range of categories, including Company of the Year, Marketing Campaign of the Year, Best New Product or Service of the Year, Startup of the Year, Corporate Social Responsibility Program of the Year, and Executive of the Year, among others. Makers Nutrition won ten titles for its impressive growth and excellent leadership by President and CEO Jason Provenzano.

Listed are the honors received:

4. GOLD – Company of the Year – Pharmaceuticals

5. SILVER – Company of the Year – Manufacturing

9. BRONZE – Fastest-Growing Company of the Year – in Canada and the U.S.A.

“Mr. Provenzano’s achievements in the nutrition industry speak for his abilities as a leader who not only transforms organizations from their initiation but someone who takes care of employees, providing them a better path in both their professional and personal lives. Hosting events that foster team collaboration and giving them monetary incentives, and encouraging participation in charity events are other attributes that seem to have created an environment that steadily fostered overall teamwork,” writes one IBA judge. With the guidance of an industry giant, Makers Nutrition has far surpassed expectations in sales, service, and success.

“On behalf of the team and myself, it’s truly an honor to be recognized and humbling to see Makers Nutrition named among so many trailblazing companies and organizations,” said Mr. Provenzano.

Stevie Award winners were determined by the average scores of more than 250 executives worldwide who participated in the judging process from May through early August.

“The IBA judges from across the world were highly impressed with the nominations they reviewed this year. With the level of achievement documented in the nominations from 74 nations, the Stevie Awards are proud to honor organizations that demonstrate a high level of achievement in a variety of industries,” said Michael Gallagher, president and founder of the Stevie Awards. “We received more nominations than ever and look forward to honoring the Stevie winners at our gala in Vienna, Austria this October.”

Details about The International Business Awards and the lists of Stevie Award winners are available at – http://www.StevieAwards.com/IBA.

About the Stevie Awards