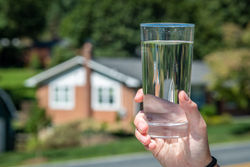 Have well water tested to determine levels of sodium.

Private wells are not regulated and it is up to the owner to have it tested, and treated if necessary.

Elevated levels of sodium in well water are being reported across the state of Maryland, and for residents with high blood pressure, drinking the recommended daily amount of water could increase the amount of sodium consumed, and therefore affect their health, say University of Maryland Extension researchers.

“We designed this publication to increase awareness that well water may be a source of sodium to consider, especially for people who are on a low sodium diet,” said Dr. Andrew Lazur, State Extension Specialist in water quality and lead author on the paper. ”It also reminds well owners to test their water and include sodium in the tests.”

The 2015-2020 Dietary Guidelines for Americans advises limiting daily intake of sodium to 2,300 mg per day according to the paper, written in conjunction with Extension Specialists Daphne Pee and Beverly Jackey.

“The American Heart Association recommends limiting sodium intake to 2,300 milligrams (mgs) a day, and is moving toward an ideal limit of 1,500 mgs per day for most adults,” said Jackey, a Registered Dietitian and Family and Consumer Sciences Educator in Cecil, Kent and Queen Anne’s Counties. “Adults with high blood pressure should limit their intake to 1,500 mg per day.”

“Sodium is the sixth most abundant element on earth and is an important component of the body, with a certain level being essential for good health. It is recommended that adults consume a minimum of 500 milligrams (mg) per day from food and water,” Lazur said. “However, it has been shown that most adult Americans consume 3,000 to 5,000 mg per day, averaging 3,400 mg for the U.S. population.”

While municipal water systems are monitored by the Environmental Protection Agency, which has set guidelines on the amount of sodium allowable, well water quality is not regulated and homeowners must determine that information for their own location. “Municipal water supply customers receive an annual summary of their water quality and can get sodium information from the utility,” said Lazur. “Private wells are not regulated and it is up to the owner to have it tested, and treated if necessary.”

A Maryland Geological Survey study found that the average sodium level in homes using well water on Maryland’s coastal plain (the region of Maryland east of I-95), was 92.6 mg/liter. According to Lazur’s research, this means that if you follow a low-sodium diet and drink the recommended amount of water per day, you would consume 15 percent of your total daily sodium intake just through your drinking water.

However, water quality varies from well to well due to the soils and geology where the groundwater is located, says Lazur, and is affected by natural minerals, contaminants, and is also impacted by municipal activities such as road salt distribution to prevent ice buildup during winter months. Using a water softener to treat for iron or prevent scaling of pipes and fixtures in systems with hard water can add sodium to drinking water as well, he said. According to the Maryland Geological Survey, average levels of sodium are also increasing due to the pumping of aquifers, which can cause brackish or salt water to infiltrate an aquifer, as well as sea-level rise associated with climate change, which is a growing concern related to saltwater intrusion into fresh water systems.

While purchasing bottled water or faucet and refrigerator filters offered in standard retail stores seems like a viable option, Lazur warns that some point-of-use faucet filters do not remove sodium content, and bottled water could have sodium depending on its source. “A study in 2001 showed bottled spring water ranged from 1-15 mg/liter; and 36 to 1,095 mg/liter for bottled mineral water. Some companies may add salt to enhance taste as with mineral waters,” Lazur said.

“Consumers can find the amount of sodium in various types of bottled water by looking at the Nutrition Facts Panel on the label,” said Jackey. “If sodium is added to the water, it will also appear in the ingredient list”.

More reliable ways to remove sodium from your tap water include using a reverse osmosis filter for the faucet you use for drinking and cooking water, and if you have a water softener, use potassium chloride as opposed to sodium chloride and bypass the cold water supply.

Read the full publication, “Sodium in Your Well Water: A Health Concern,” or access more information about private wells and drinking water from the University of Maryland Extension at extension.umd.edu/well-and-septic. To learn more about tracking sodium intake through diet, Jackey recommends the American Heart Association’s free downloadable sodium tracker.

Cancel reply
Ideal CU Combines 5-Week Step Challenge with Prep for Successful MN…
Pubic Grooming Doesn’t Raise STD Risk
To Top
We use cookies to ensure that we give you the best experience on our website. If you continue to use this site we will assume that you are happy with it.Ok